The ethical protest: Preserving our rights without devastating our morality 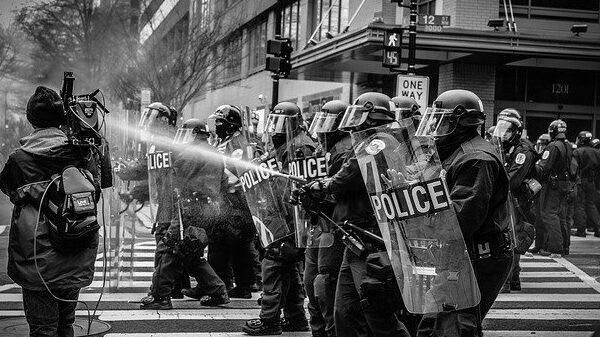 The legal right to public protest sits at the very heart of modern democracy. Protesting is viewed by many as a basic right to voice opinions on a variety of issues and gives people a sense that they have a legitimate say in how policies are made and decisions reached. In recent months, driven by all sorts of chaotic events across the globe, these protests have become increasingly intense.

Israel is now facing a deep social divide that has erupted in protests over the country. In Jerusalem, demonstrations have reached violent levels spurred on by anger over allegations of a corrupt leadership, ineffective management of the coronavirus crisis as well as overall resentment over the financial situation brought on by that crisis. Other demonstrations are more specific in their anger, targeting issues like why certain neighborhoods have been locked down while others have not, or inequality within society.

While the topics at play vary greatly from city to city and certainly from nation to nation, there is a common denominator in these protest movements calling for change in the status-quo or a general re-evaluation of how people are being treated. While the catalyst in the recent (and ongoing) American based protests was a shocking case of police brutality, the issues at play are not new ones but reflect on a decades-old allegation of inequality and abuse where segments of the population feel that they are being mistreated by the broader society.

While the target of these protests is often the sitting government, this is not always the case. And while protesters might seek to see that government unseated, it is well worth noting that as much as democracy supports these rights to demonstrate, that same system of governance ensures that regime-change can only be made possible through a legal and free system of elections. The “street” cannot be where policy is made, where leaders are elected or demoted.

But the power of protest lies in advancing issues to the forefront of public concern and for that reason, its importance cannot be diminished.

Jewish tradition has long heralded this right, and, throughout the years, there are numerous examples of our sages using protest as a means to bring attention to issues of communal concern.

The right to protest is something to be championed not only by the demonstrating public but as much so by the target of that demonstration. Ruling authorities, and particularly democratically elected governments must know that they exist within a structure that thrives on accountability. Regardless of whether the ruling entity agrees with the position of the protesters, a government must never limit the right of the public to demand change. Stifling public opinion is something that we have seen in the most dangerous of regimes throughout history and is something which can never be condoned.

But as much as we defend the public right to demonstrate, it is as important to stress that this right must never be perceived as a green light for unrest and certainly not physical violence. Whatever anger and resentment one might feel over specific policies or decisions, this can never entitle the protester to act out against individuals or the police. In particular, it must be remembered that the job of the police is to protect the public interest and that job should be respected.

Similarly, a protester does not have the right to block traffic or take similar actions that could cause irreparable damage (either in time or in property,) to people who are completely innocent and often not connected to the issue in question. As mentioned, vandalism, looting or any other sort of destruction of public or private property can never be condoned in the name of legitimate protest.

The modern world is taught to believe that diversity of opinions and voices is a sacred value — and indeed the right for people to have differing beliefs is an understanding that deserves support both in Jewish and secular law.

But when people pervert that value in ways that endanger others and the public order, they are causing widespread harm to society at large. History and our tradition have taught us that this is a deeply dangerous process that is likely to end with the ultimate rejection of the democratic and ethical principles upon which our society prides itself.

Every demonstration must be guided by that understanding so that social justice and legitimate change can take place in a peaceful, respectful and ethical manner.

38 תגובות על “The ethical protest: Preserving our rights without devastating our morality”